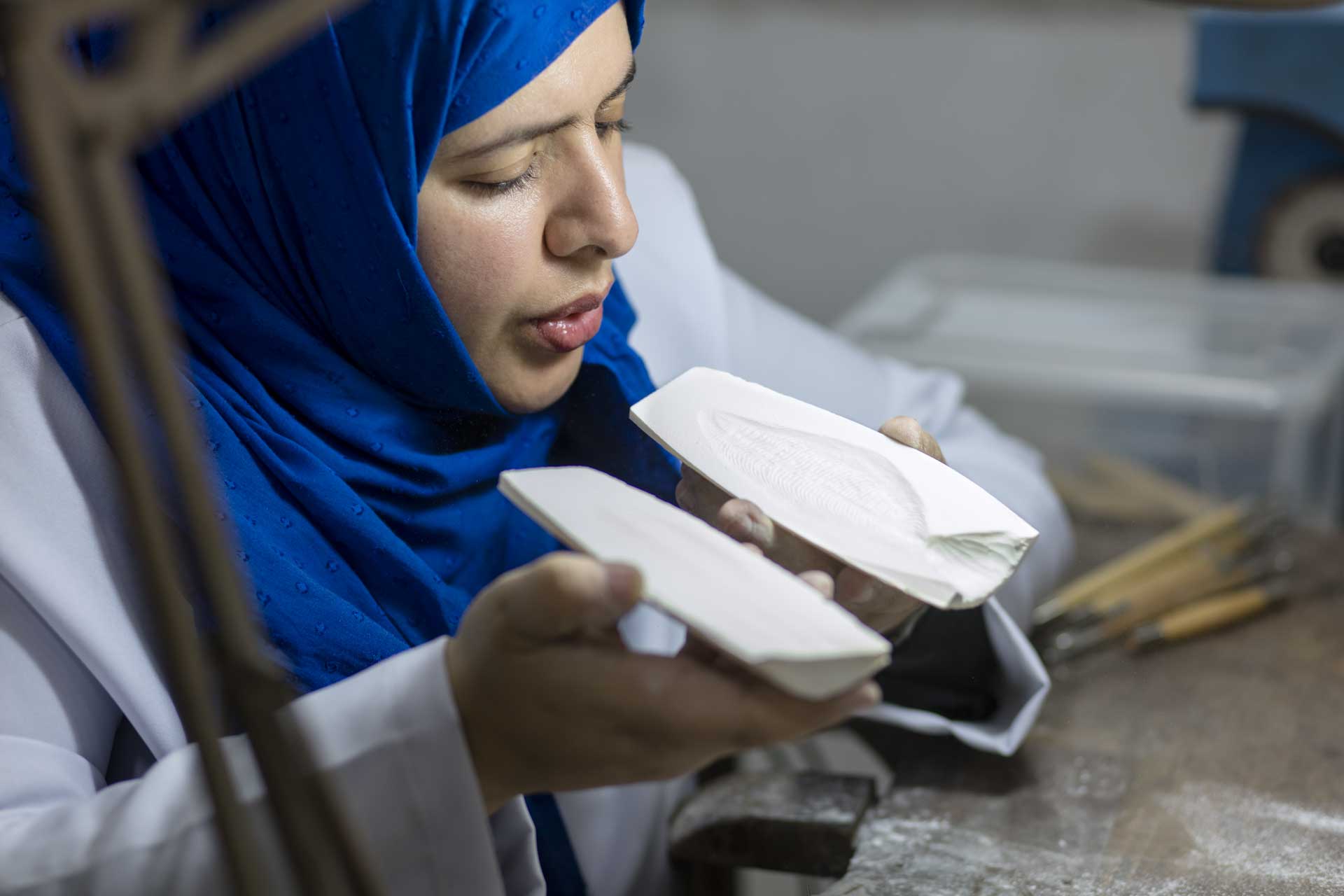 Azza Al Qubaisi is a trailblazer. A jewellery artist and designer, she’s also set up government handicraft projects showcasing Abu Dhabi’s craft and design talent to the world. Success and an array of awards have come from a determination to follow her own path.

People questioned her decision to study art, but she believed it was “a calling”. Her pieces reflect thought-provoking perceptions of nature while preserving local traditions. Respectful of the past, she wants to lead the way for a new wave of Emirati jewellers.

“I have always had an interest in making things, but initially I didn’t know you could study to become a jewellery designer and make it a career,” says the mother-of-two, who studied at Chelsea College of Art and Design in London and London Guildhall University.

“My father loved collecting gemstones, and at one point my mother designed her own jewellery. But when I had the opportunity to travel to the UK to continue my education, my main goal was environmental studies.”

This soon changed. “It became very clear to me that art was something I wanted to pursue,” she explains. “It made me happy.”

“At Chelsea College we worked in a lot of different mediums and with different materials, and I felt jewellery would be my best option because I would be able to express myself and reach many members of my community, as people wear jewellery.” 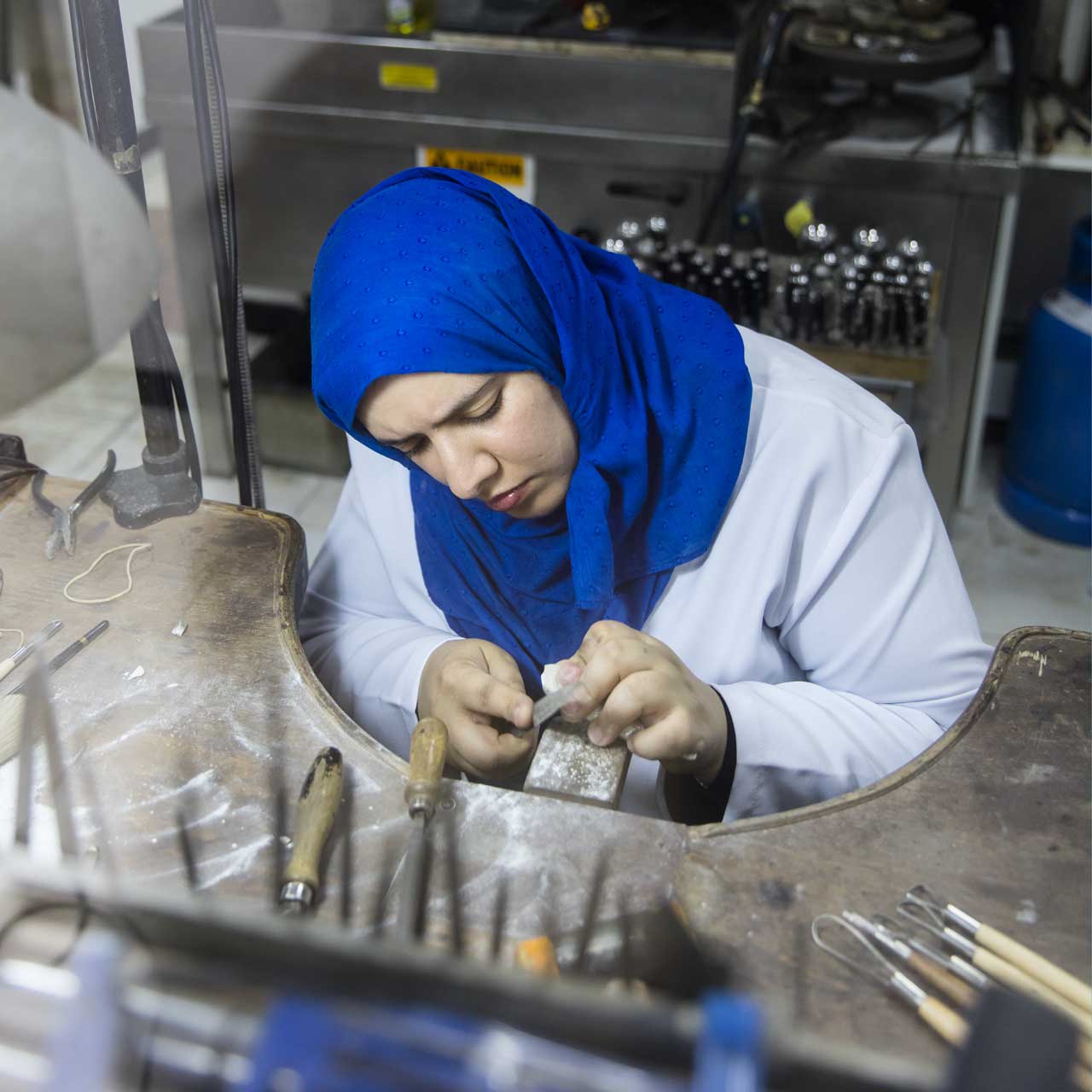 Back in the UAE, she formed a jewellery design workshop ARJMST — an amalgam of her name and those of her siblings. It was, she recalls, a tough initiation.

“The reality was that people were shocked as to why I would be designing and making jewellery,” she said. “They thought my work was weird. It was an issue of taste, and what people were used to.”

“In the past, it was about a brand, and diamonds, and wearing copies. Now people want bespoke pieces — they want to be individual.”

Collections based on nature and tradition — such as Marine Symphony, using an ancient technique to fashion cuttlefish into pendants and rings and Angel Tears, referencing the UAE’s maritime-trading past and rich natural resources — gradually gained attention. “When I held my first show in Abu Dhabi in 2004, some people started to appreciate it was different,” said Ms Al Qubaisi.

I seek to create pieces that tell a story and change people’s concepts of jewellery, while at the same time opening their minds to the realisation that the world is delicate. 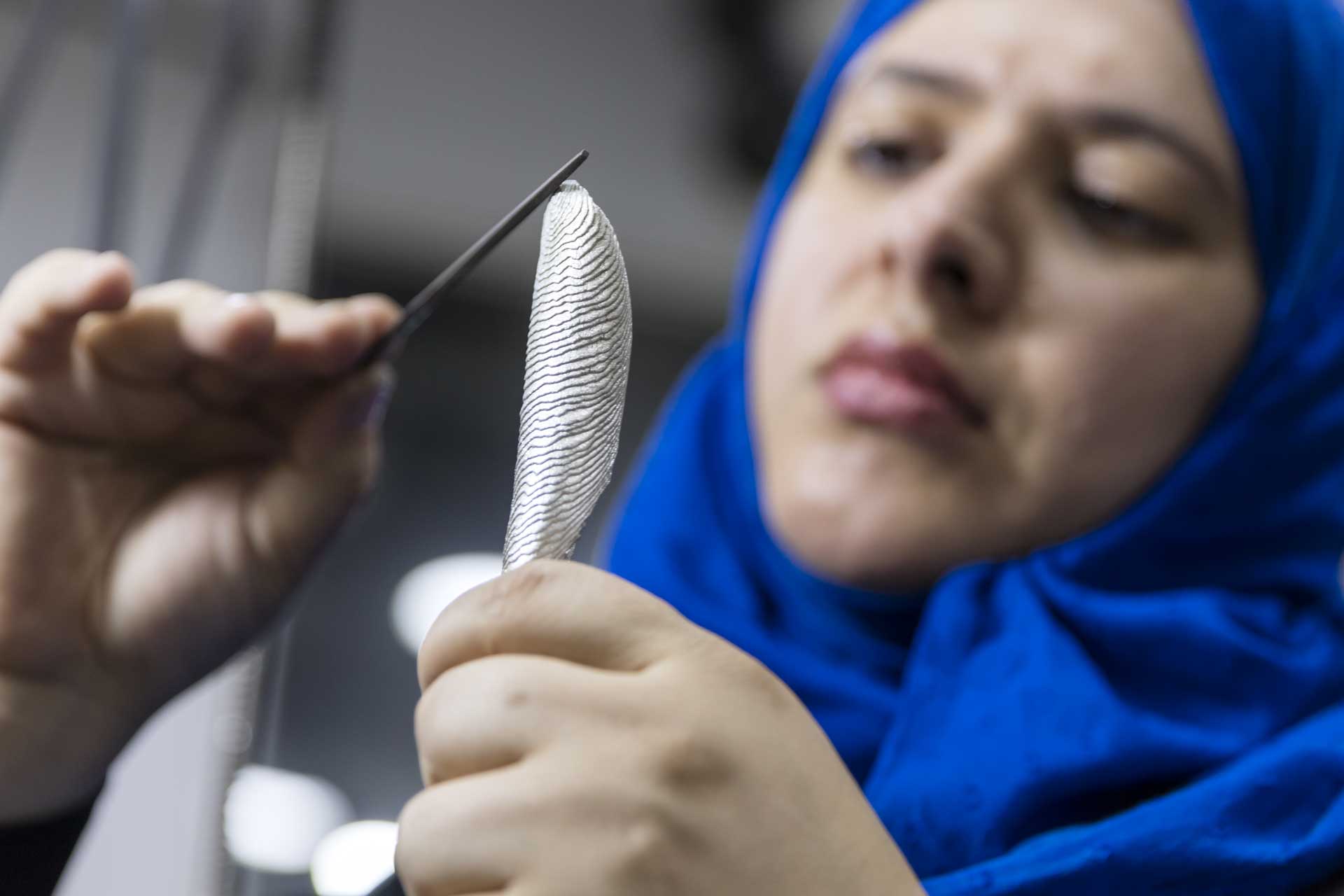 She is still hands-on in the creative process, from sketches and prototypes to production. She never restricts herself to one material, saying: “I work with diamonds, gold, silver, asphalt and leather — it’s not the value that matters, but what it is telling us.

She established the Made in UAE project to develop and promote Abu Dhabi’s crafts and design world, and the jewellery exhibition space Voice Gallery. In 2011, she was named the British Council’s most successful UAE Young Design Entrepreneur in Fashion and Design, and Emirates Woman of the Year for community contribution and business achievement. It was, she says, a milestone — “a real award with true value”. 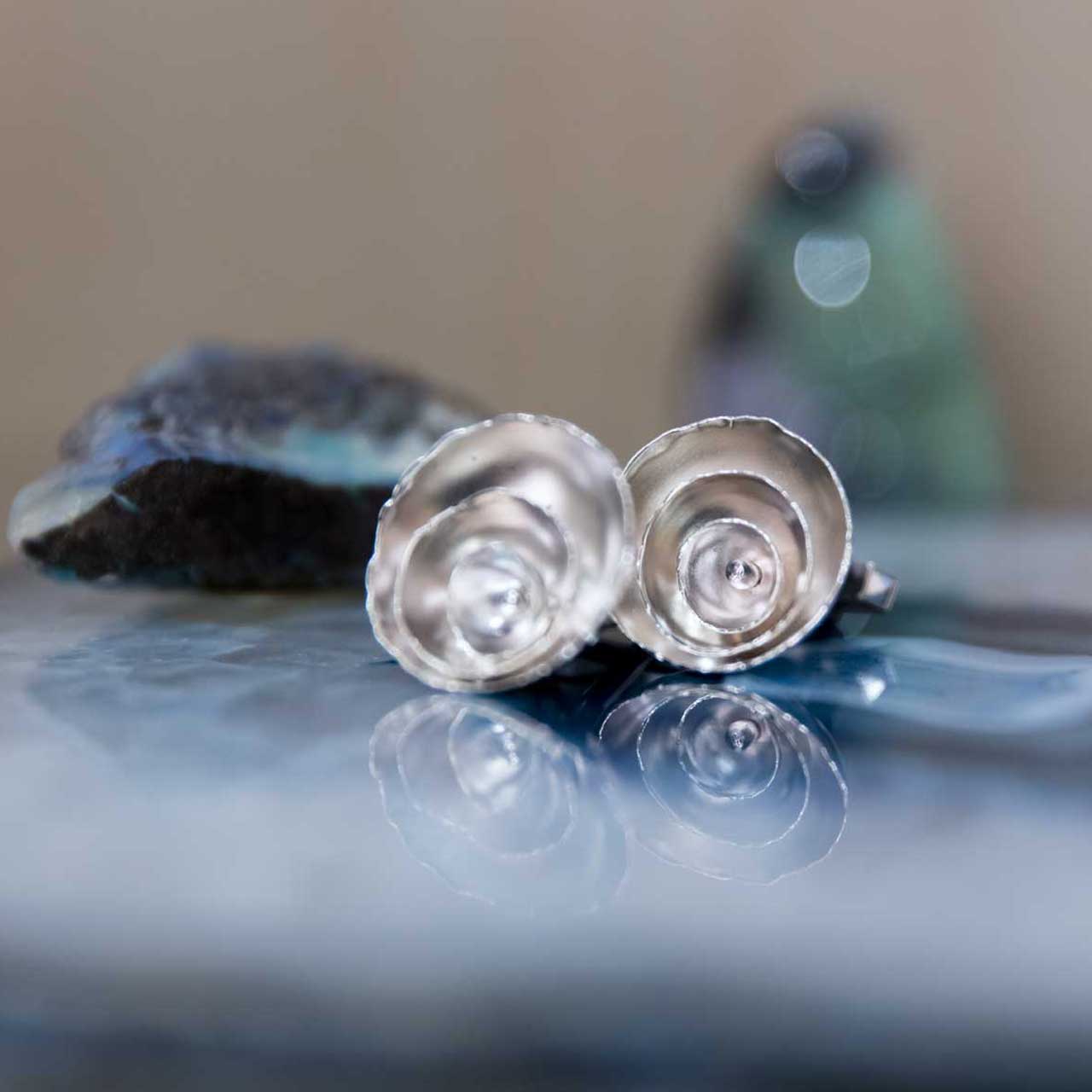 For all her creative leaps as a designer, she remains rooted in her culture, valuing her heritage, and preserving it as a philanthropist who treasures local traditions. The Lamst Ibdaa initiative in Abu Dhabi, which she launched in 2011, is a workplace for talented UAE designers to hone and advance their skills.

She remains inspired by the world around her. “I always wanted to find ways to express myself, and, for me, it was all about the environment and the balance of nature,” she explains. “I seek to create pieces that tell a story and change people’s concepts of jewellery, while at the same time opening their minds to the realization that the world is delicate.”

“I held collections that were about the oud, one of my bestsellers and most influential creations. Wearing this wood was not something people even thought about, and it was a bit shocking for them when I did my first show, but shocking in a good way. I still remember the face of the lady who bought one of the first pieces, and how it lit up — she didn’t believe she was seeing oud that was wearable.

“To me, that was a challenge, because I wanted to tell a story, not just of how oud can be beautiful and smell nice, but about the reality of it. It was such an affordable material that has now become so expensive, and it is those types of stories I want to create — capturing their essences, evoking an emotion.”

Her creations range from prayer beads carved from camel bone to pendants made from incense holders, using materials as diverse as fossilized shells, rusted pieces of iron, stainless steel, as well as gold, silver and diamonds. 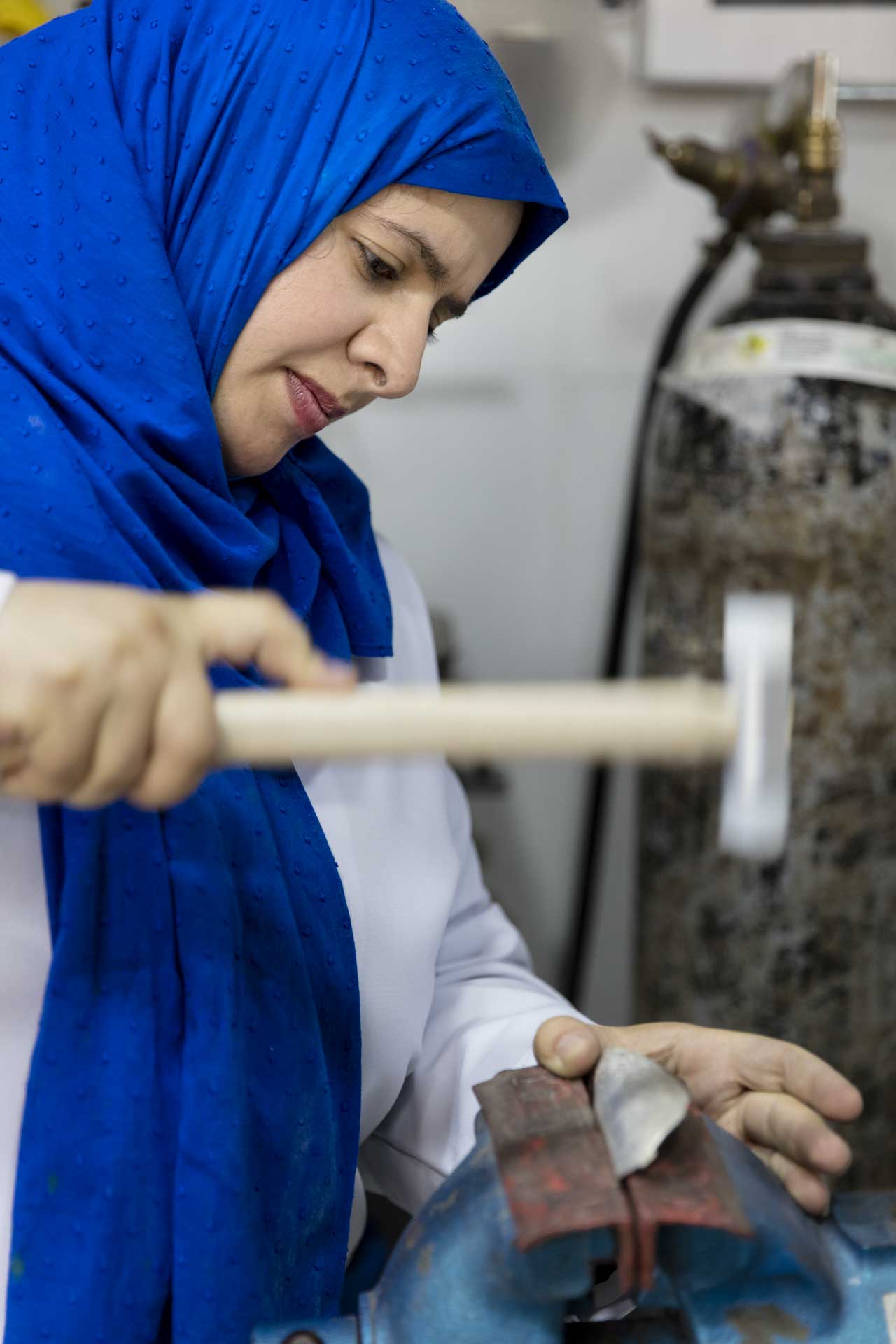 That echoes the message she sends to young Emiratis about participating in WorldSkills Abu Dhabi 2017, which she sees as an invaluable platform to sample and experience skills, and set themselves on a career built around what they love.

“I believe that each person, if they just focus internally, will find their true calling — what makes them tick, what makes them come alive, and, at the end of the day, what makes them successful,” she says. “It is very important to try out skills, find what really suits you, go out there and talk to people, because that is a big part for learning for anyone. WorldSkills is an incredible opportunity that never existed in my generation, and such platforms are an amazing opportunity that future generations need to maximize in order to find their passion.

WorldSkills is an incredible opportunity that never existed in my generation, and such platforms are an amazing opportunity